Into the Twenties [Le Sueur]

It’s a new decade. So new, in fact, that it feels exactly like the old one. Nondescript weather overlays the world in a grey wash. It is winter in the Northern Hemisphere. Such a drab bacckground is to be expected, I suppose.

I’m sipping on a morning caf, watching an entertainment stim on the side-screen of my hab’s primary terminal. It is a futuristic stream, set in the past. I have decided to start the new year with something to satisfy that taste of mine; the enjoyment of story-telling and imagined future-tech.

Even though the volume is dialled up, the stream still fights with the intrusive howl of the hab’s wash-engine. Work starts up again tomorrow, and I need clean clothes. Break is over. The routine begins anew. Reminds me: the recycling is full. I slip out into the chill, emptying my small receptical into the municiple mass-container. I’ve lost track of when the next collection day is. I barely even know that today is a Wednesday. Such is the way of the holiday stretch.

It was a late one, last night, but also a quiet one. I spent the earlier hours propped up on a stool in the local bar, forcing myself into small talk with the staff, between pages on my reader. Trying to learn how to do it smoothly. When the crowds started to arrive, revellers wising to see in the new year in companionship of community, I retreated back to my hab. I wasn’t feeling up to the press of people. I wished the staff good luck for the long night ahead, and left. Hands in pockets. Collar turned up. Ducking out into the cold.

By the ceremonial hour, I was slouched back in my hab. One leg flung over the edge of my too-small couch, chewing on snacks and streaming entertainment stims. Junk food for the belly, junk food for the brain. When the display on my comm flicked to zero hours, the world outside responded with the screech and crackle of small fireworks. A tradition that humanity will have a lot of trouble overcomingp; I’m not a fan of those home-launched explosives. The big communal displays, as another lost face in a crowd that watches the sky, those are more my thing. Old technology, controlled by new technology in seemingly impossible precision. There’s a comfortable combination of past and present there, creating something neither could achieve on their own. The home ones, though? Low quality pops and whistles, literally blowing up your own credits, just to be able to do it out the back of your own hab. 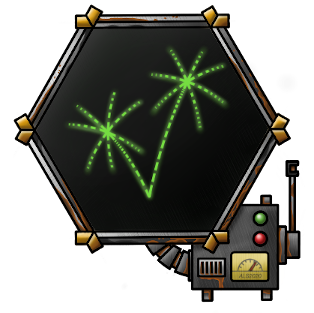 The celebrations continued, intermittently, for the next ninety minutes as each display vied for attention over the others. By the time they were done I was ready to call it a night. I doubt I’d have been able to sleep before then, anyway.

On the social feed friends wished each other well, optimistically embracing the next swing around our star. On the logical side of things, I know that it’s just another day, just another hour, and just another year. The only change is what you make – the clockwork of our lives is uncaring and incapable of creating positive change on its own. On the other side, though, I can’t help but get a little caught up in all the enthusiasm. We are social creatures, deep down, and we seem to unconsciously reflect the collective mood. There is a sense of hope in the stories people tell each other about the year ahead. And it’s not wrong to have that hope. But to make those hopes become reality, behaviour and action have to follow through.

So, we take stock. We think about what we want. And then we have to do it to make it happen.

For me, that’s improving my health. There isn’t enough lean meat on my slim frame, and people see it. I look less healthy than I thin I am, as for better or worse society seems to judge males on the mass of their upper body. So I need to exercise more rigorously, and more consistently. And eat right. It’s also improving the finances. To do that, I need more credits coming in. I need to check the bulletins, see what is out there, and apply myself.

And I need to break the back of this loneliness. Find ways to socialise, but not just by showing up to an arranged social-meet in a bar. I’ve tried that, and it didn’t work. I need to do things I want to do, but with people I want to do them with. The only question: what do I want to do this year?